Awards give an inside taste of Aussie food world 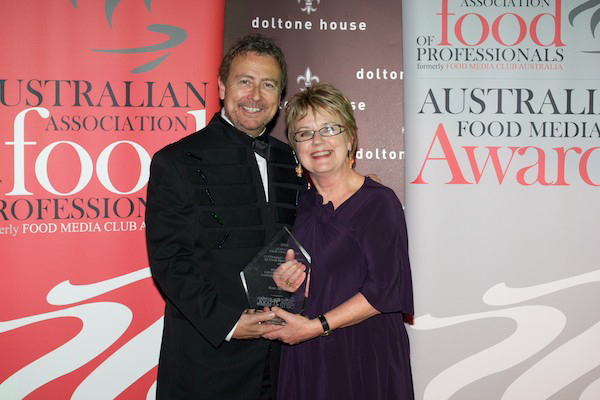 Celebrating the passion and talent that shape public conception of food and wine, the Australian Association of Food Professionals (AAFP) announced the winners of the biennial Australian Food Media Awards on the evening of 28 October at Sydney’s Doltone House.

They are the only awards to carry a significant cash prize and since their inauguration in 1995, the awards have become the highest accolades in Australian the industry celebrating the very best of the whole range of food communicators.  The Awards focus on encouraging communication about food and wine, ranging from the very practical debates about nutrition to the ideological investigation of food taboos. There are almost as many audiences as there are subjects to discuss. These awards are designed to recognise and applaud the trail-blazers who deliver the goods in a style and voice that best speaks to those audiences.

From the earliest times humans have sought to award achievement or merit in some way. Sometimes the award was valuable, being made of gold or similar. Other times its importance was not in its material but what it represented such as wreathes – which would wither…or a triumph or an acclamation. Sometimes it was intangible  – being “mentioned in despatches” or ancient poem tales or chronicles. Sometimes it took the form of a flag or banner, or a title or an addition to the person’s name. Sometimes it was semi-permanent such as perpetual trophies

It was a night of the F-word …all four letters of it … lashings of it. It was a night all about F-O-O-D.  It was about Food enjoyment, Foods reporting, Food discovery, Foods newsworthiness, Foods champions, Food’s attributes, Food balancing …it was about the people who shape the food psyche of this lucky country.

It is two years since the last awards…2008 and a lot can happen in the world of food media in two years.

In a space ruled in 2008 TV ratings by potty-mouthed Gordon Ramsay, Masterchef has taken over.  In the past two years a raft of celebrity chefs have fronted TV shows with different social twists – and with it the frocking up of restaurant critics has continued as part of this entertainment.

And all things Hispanic was identified as one of the leading influences these days.

A year ago Ferran Adria of the then world’s number one restaurant – il Bulli fame came to town and performed at Sydney’s elegant State Theatre. It was molecular gastronomy, a catalan/english interpreter – and a video show …”peanuts or lollies sez the boy up stairs”.

The night was riotously hosted by ABC radio broadcaster and the narrator of Lifestyle Channel’s Come Dine With Me, James Valentine.

And the winners were: http://www.foodprofessionals.org.au/afma-2010-award-winners