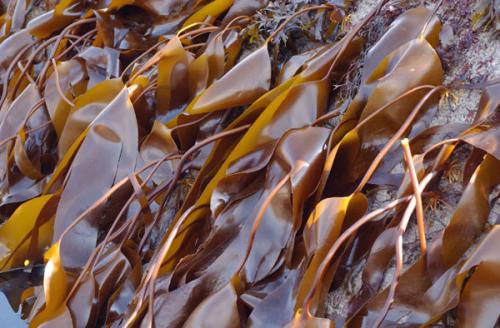 I must confess when I was a slip of a lad I was pretty good at pressing seaweed. The girls pressed flowers – I did seaweed.

Possibly it was an early indication of my predilection to be bit of a wax-head in later years.  But I did do some damned fine work – especially with Ascophyllum nodosum. I digress.

Let’s talk Laminaria digitata. That’s a kelp – and a pretty brutish sea weed to press.  But ingest it and you’ll find it contains nearly thirty minerals which nourish the glands, especially the thyroid and pituitary.

This may all sound fanciful and of the rustic, hand-made, macramé school of thinking,  but …seaweed also gives beer a decent head which will produce Belgian lace, that spider web affect left by the head as the glass is drained.  The sign of a well made beer.

To my olfactory senses, kelp – or certainly the iodine it contains – is more apparent in wheat beers like Red Back or Corona.  That obligatory accompanying wedge of lime may give the Mexican brew the appearance of a Carmen Miranda among beers, but to my nostrils it also makes it more socially acceptable …a bit like a deodorant.

But it’s not the iodine in beer that is in the news. Iodine will be foisted on us in our daily bread come 29 October 2009. It will be law.

FSANZ (Food Safety Australia And New Zealand) who have instigated this following their Australian Total Diet Study,  say that about 43% of Australians are deficient in Iodine and that iodine fortification of bread will reduce that to around 5%. Good for pregnant women, babies and young children– but could be tricky for folk who have a thyroid condition that they are managing. The Dietiians Association of Australia have flagged that as a concern.

But before that – by 13 September 2009 bread, including focaccia, muffins, bagels, rolls and flat bread, will also be invaded by mandatory folate (folic acid).

So remember it isn’t what’s in your sandwich …it’s what’s ….er… IN your sandwich!  Unless it is an organic bread sandwich – in which case you could just have a kelp sandwich – which contains iodine AND folate….