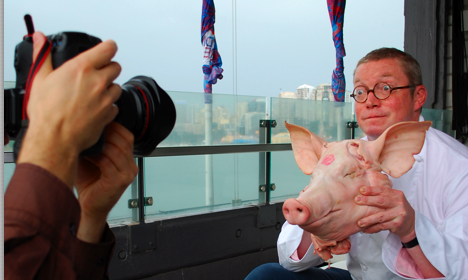 Fergus Henderson was back in Australia last week lording over Nose to Tail dining.

Nose to Tail eating is a phrase that has become synonymous with the British chef of London’s St John restaurant. Think Fergus – think Nose to Tail – and you just have to think of the noble and versatile pig from whence his fried pigs tail, pigs head salad and trotter gear are so generously and lip-smackingly derived. Last week Fergus was presiding over a 13 course Nose to Tail lunch for Melbourne chefs at The European restaurant. Matching the accompanying wines with these morsels of offal and extremities was the challenge for Julian Langworthy, winemaker at Knappstein in the Clare Valley. As it turned out, it was not such a challenge as Julian is a pretty serious pig fancier in his own right.

Each year, in the brewery at Knappsteins Enterprise Winery, Julian hangs a haunch of prosciutto to age that he has lovingly cured himself. He has recently bought a property in Clare with its own smokehouse and in the back paddock are three little pigs, black hairy Berkshire pigs, which will become next year’s prosciutto.

Literally up to his elbows in vintage Julian stole away to meet Fergus and experience his own matching of Knappstein wines with the porcine offerings that Fergus and The European’s chef Ian Curley turned out.

If the menu covered the gamut of textures and flavours from all parts of the pig , the Knappstein portfolio of wines were up to it.

From the limited release 2009 Germanic style 8.8.18 riesling and its 2009 hand picked riesling stable mate, to a eucalyptus and cassis 2007 cabernet merlot and an uplifting sparkling shiraz with its balanced combination of tannins and sweetness, the wines were all on the money. And it was the exceptionally food-sympathetic Knappstein lager that was the accompanying beer.

Flavour and texture together with counter balances of fat and acid are the Fergus and St John way. Pork spleen, presented as a slow poached rotolo was reminiscent of a good quality liverwurst in flavour and the texture of slow cooked calamari. The crispy tail was unctuous and moist, the brawn and pigs ear terrine deliciously al dente and …well…delicious.

Fergus has an endearing oratory style. When speaking of his food – his brow furrows, he looks into the middle distance and launches into a considered treatise on the appeal and nuances of his choices of cut ”beyond the fillet”. His affliction with Parkinson’s deliberates his speech and physically peppers it with Joe Cocker-like gestures. To be in his company is akin to being with an ebullient culinary combination of Stephen Fry and animated Cocker.

While his Nose to Tail philosophy is in homage to the many overlooked tasty bits of the beast he insists that it is: “ingenuous to knock an animal on the head and not enjoy it in its entirety”. This almost anthropomorphic view carries through to when he pontificates on his dishes. On the elements of a salad he says the components “should be friends rather than making love” or “the extremities, the snout, the trail, the trotters – purgatory between fat and flesh … “

There should be more Fergus Hendersons in the world.

← Pour and prattle festival
A Taste For The Future →

1 Comments on “Beyond The Fillet”