A Sure Kraft Redemption? 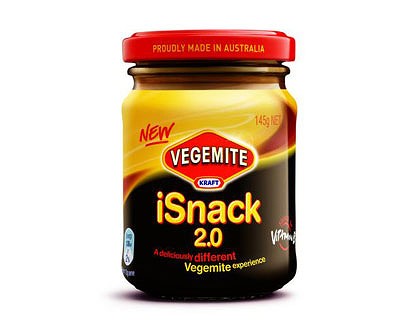 The recent debacle of naming the new Vegemite abomination came back to firmly bite Kraft on its Vegemite factory. iSnack 2.0…give me a break! The twitterverse and blogosphere went ballistic.

Even on the face of it, the dozy idea of Vegemite being mixed with cream cheese flies in the face of the half-life of 10,000 years that ‘regular’ Vegemite has that defies any ‘use by date’. Putting cream cheese into Australia’s answer to the national umani cornerstone is beyond dopey and smacks of demented brand extension engineering.

Tweets variously suggested: ivomit then ithrowinbin; v2.0? Is it because pureed anus in a jar lacked commercial appeal?; Turns out it’s incompatible with iToast 3G & NextGen iButter and even the suggestion that the new Vegemite flavour being used in an Adriano Zumbo patisserie creation – and called iSnot. The indignation was such that hundreds of tweets could be found on Twitter at the hash tag site #vegefail. A generic viral Hitler scenario was even converted to vent the collected on-line spleen.

News Ltd’s blog ‘The Punch’ came out frothing at the mouth: “…the iSnack 2.0 debacle will be taught for years to come in marketing courses as a step-by-step example of how to upset everybody – the oldies who are fiercely loyal to Vegemite in its existing incarnation, and the youngsters who regard the internet-driven name of this (woeful) new brand as patronising gimmickry, akin to Sorbent trying to corner the youth market with a ‘hip and groovy’ new toilet tissue called iShit.”

Media reports were quick to proclaim the un-Australian nature of this act by identifying the culprit, Kraft, as “the American-owned food conglomerate”.

The red faced vegfail pundits at Kraft jettisoned the iSnack name and hoisted seven other names up the flag pole to see what got saluted and – now we have Cheesybite. That in itself is another story.

It’s just all wrong. If ever I want Vegemite with cream cheese I’ll concoct it myself on a piece of bread, it’s not rocket science. I don’t need a pre-mix. The combination vaguely reminds me of Irish Cream liqueur. It is a very unpalatable notion to think of keeping a dairy product blend stable over a long shelf life and unrefrigerated.

← Nose to tail eating
The indisputable Queen of the foodies →